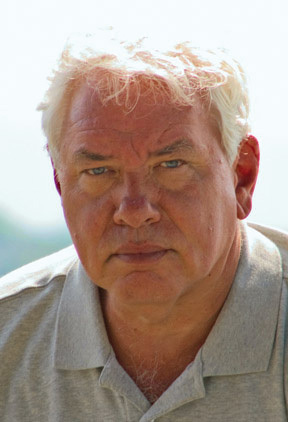 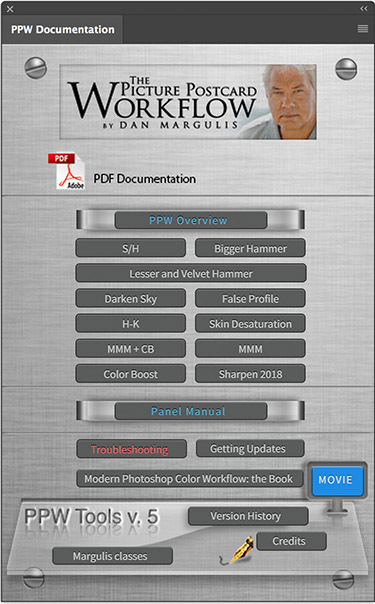 Dan Margulis is internationally regarded as the leading authority on color correction. He is the author of Professional Photoshop, which, since its first edition in 1994, has become the unofficial bible of the prepress and printing industry. His groundbreaking book Photoshop LAB Color changed the face of professional retouching. In 2013, he released a new book, Modern Photoshop Color Workflow, describing how the techniques supported by the panel that you can load here fit into an expedited, high-quality color correction workflow.

Formerly a professional prepress manager with over 20 years experience heading electronics departments at high-end trade shops, he offered small-group, hands-on color correction classes in the U.S., Canada, and Europe, in four different languages. Now semi-retired, he continues to speak and teach occasionally. His Applied Color Theory course has been offered by Ledet Graphics Training since 1994. Details on pending classes are here.

In September 2001, Dan was one of the first three persons named to the Photoshop Hall of Fame of the National Association of Photoshop Professionals.

In 2007, he introduced a radical approach to color correction called the Picture Postcard Workflow (PPW). Instead of the traditional method of using one set of curves to adjust both color on contrast, the PPW has three main steps: one to eliminate color problems, a second to add contrast, and a third to incorporate pleasing color.

The original idea of the workflow was speed. There was need for a method of reaching high-quality results in five minutes or less. It was understood that there would have to be certain compromises in achieving this, as traditional professional color correction spends much more time on an image.

As it turned out, the PPW generally exceeded the quality of traditional methods. Something that's both faster and better attracts attention. The workflow has therefore been widely adopted by professionals. In March 2013, Dan published his first new book in several years, Modern Photoshop Color Workflow, describing the PPW (and the panel you're about to be invited to download) in great detal.

Since 2007, the PPW basics have remained the same but there have been constant changes in specific implementations. Many steps were reduced to actions, some easy, some complex. We have always shared these without cost. However, because these actions were constantly changing, distribution was difficult. We originally made each one available separately, updated as necessary it being up to the downloader to know what the current version is.

In September 2011, we released a major boost to productivity: a fully scripted panel that accesses all the actions and commands used in the workflow in a logical order. Each action can be played with a single click. The panel includes extensive documentation in PDF format for each of the many actions, as well as an overview of the entire PPW. Also, even though some of these actions involve fifty or more steps and would therefore completely fill the image history buffer, they have all been scripted to be considered a single history state, so that they can be cancelled with a Command-Z.

The panel enables curves adjustment layers that use the traditional Photoshop curves dialog and not the one introduced in Photoshop CS4. It also allows addition of a composite (merged) layer at any time without losing the original layers underneath.

Version 5.0 adds two major features. First, a Variants functionality allows saving flattened or unflattened versions of the file at any time. The Variants automatically are saved into a subfolder for easy deletion at the end of the process. All Variants can be opened as a stack at any time, into the current colorspace. Second, users may not incorporate their own actions into the panel. Six such custom actions are presupplied.

The Sharpen action, renamed Sharpen 2018, allows two new options. One prevents sharpening of blue objects, useful for those whose work commonly involves skies. The second, called Soften Shadows, does what it says. The two come as layers, so it’s easy to limit their effects to certain areas.

The download includes an installer that loads the entire action set, full on-board documentation of each action, and the PPW panel. We believe that the actions work in any language version of Photoshop from CS1 on. The panel, however, cannot be used with a version earlier than Photoshop CS6 (although you can still download the actions and the documentation separately).

Previously certain versions of the panel required Adobe Extension Manager for installation. This is no longer the case; our installer is self-contained.

If you are still having trouble with the install and would like support from us, we need a lot of specific information. Click here to proceed.

FOR USERS OF PHOTOSHOP CS5 AND EARLIER

Photoshops CS4 and earlier did not support third-party panels. However, almost all of the base actions can still be used in any version at least back through CS1, although not with all the panel's functionality.

Photoshop CS5 did support panels but required Adobe Extension Manager and a separate version of panel software. We did not update it to Version 5 and will not do so in the future. Users of Photoshop CS5 may still use PPW Tools panel version 4.0.5 although we cannot offer technical support. Adobe Extension Manager is required. Click here to download CS5 installer for Windows/Macintosh (this installer works only in Photoshop CS5.)*

The action set for version 4.0.5 can be downloaded here and, when unzipped, loaded into Photoshop's Actions palette.

The PDF documentation for all the actions in the version 4.0.5 set is available here.

NOTE: If you are using the panel, you don't need any of this, as it is installed automatically.

Other Resources and Links

* While web links into this page are welcome, please don't copy the content to your own website or link directly to the files here. That way when files get moved around or updated on our site, your links won't break and our log files won't fill up with errors. Thanks.